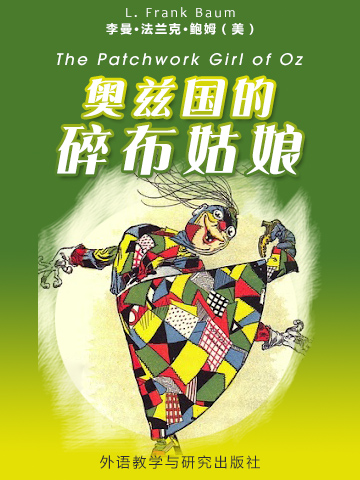 奥兹国的碎布姑娘
The Patchwork Girl of Oz

When Ojo entered the room he ran quickly to the statue of Unc Nunkie and kissed the marble face affectionately.

Then he drew back and looked around the room, and the sight of the assembled company quite amazed him.

Aside from the marble statues of Unc Nunkie and Margolotte, the Glass Cat was there, curled up on a rug; and the Woozy was there, sitting on its square hind legs and looking on the scene with solemn interest; and there was the Shaggy Man, in a suit of shaggy pea-green satin, and at a table sat the little Wizard, looking quite important and as if he knew much more than he cared to tell.

Last of all, Dr. Pipt was there, and the Crooked Magician sat humped up in a chair, seeming very dejected but keeping his eyes fixed on the lifeless form of his wife Margolotte, whom he fondly loved but whom he now feared was lost to him forever.

Ozma took a chair which Jellia Jamb wheeled forward for the Ruler, and back of her stood the Scarecrow, the Tin Woodman and Dorothy, as well as the Cowardly Lion and the Hungry Tiger. The Wizard now arose and made a low bow to Ozma and another less deferent bow to the assembled company.

"Ladies and gentlemen and beasts," he said, "I beg to announce that our Gracious Ruler has permitted me to obey the commands of the great Sorceress, Glinda the Good, whose humble Assistant I am proud to be. We have discovered that the Crooked Magician has been indulging in his magical arts contrary to Law, and therefore, by Royal Edict, I hereby deprive him of all power to work magic in the future. He is no longer a crooked magician, but a simple Munchkin; he is no longer even crooked, but a man like other men.

As he pronounced these words the Wizard waved his hand toward Dr. Pipt and instantly every crooked limb straightened out and became perfect. The former magician, with a cry of joy, sprang to his feet, looked at himself in wonder, and then fell back in his chair and watched the Wizard with fascinated interest.

The Patchwork Girl of Oz by L. Frank Baum, is a children's novel, the seventh set in the Land of Oz. Characters include the Woozy, Ojo "the Unlucky", Unc Nunkie, Dr. Pipt, Scraps (the patchwork girl), and others. The book was first published on July 1, 1913, with illustrations by John R. Neill. In 1914, Baum adapted the book to film through his "Oz Film Manufacturing Company."

In the previous Oz book, The Emerald City of Oz, magic was used to isolate Oz from all outside worlds. Baum did this to end the Oz series, but was forced to restart the series with this book due to financial hardships.[1] In the prologue, he explains how he managed to get another story about Oz, even though it is isolated from all other worlds. He explains that a child suggested he make contact with Oz with wireless telegraphy.[2] Glinda, using her book that records everything that happens, is able to know that someone is using a telegraph to contact Oz, so she erects a telegraph tower and has the Shaggy Man, who knows how to make a telegraph reply, tell the story contained in this book to Baum.

L. Frank Baum, Writer, born in Chittenango, New York, USA. A sickly child, he studied at home, became an actor (1870s), worked in the family oil business, then moved to South Dakota. While working as a journalist there, he wrote his first book, Father Goose: His Book, published in 1899 after he had moved to Chicago to work on a trade magazine for window decorators. It proved a success; but his next book, The Wonderful Wizard of Oz (1900), was even more successful, and he adapted it for the musical stage in 1901. After travelling to Europe, he settled in Pasadena, CA (1902), where he turned out 13 more books in the Oz series and many other children's stories, mostly in the fantasy genre, using pen names such as Schuyler Staunton, Laura Bancroft, Captain Hugh Fitzgerald, Suzanne Metcalfe, Floyd Akens, and Edith Van Dyne. Although appreciated primarily as children's tales, the Oz books have also been read as incorporating Baum's views on American society.