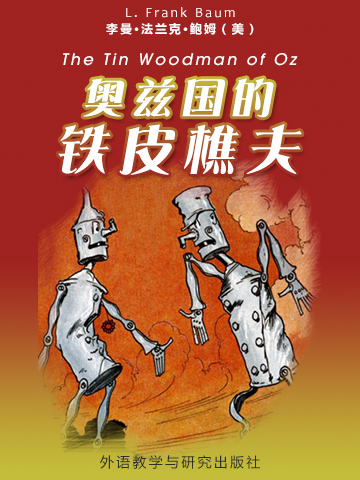 奥兹国的铁皮樵夫
The Tin Woodman of Oz

It was not more than a two hours' journey to the house where Nimmie Amee had lived, but when our travelers arrived there they found the place deserted. The door was partly off its hinges, the roof had fallen in at the rear and the interior of the cottage was thick with dust. Not only was the place vacant, but it was evident that no one had lived there for a long time.

"I suppose," said the Scarecrow, as they all stood looking wonderingly at the ruined house, "that after the Wicked Witch was destroyed, Nimmie Amee became lonely and went somewhere else to live."

"One could scarcely expect a young girl to live all alone in a forest," added Woot. "She would want company, of course, and so I believe she has gone where other people live."

"And perhaps she is still crying her poor little heart out because no tin man comes to marry her," suggested Polychrome.

"Well, in that case, it is the clear duty of you two tin persons to seek Nimmie Amee until you find her," declared the Scarecrow.

"I do not know where to look for the girl," said the Tin Soldier, "for I am almost a stranger to this part of the country."

"I was born here," said the Tin Woodman, "but the forest has few inhabitants except the wild beasts. I cannot think of anyone living near here with whom Nimmie Amee might care to live."

"Why not go to Ku-Klip and ask him what has become of the girl?" proposed Polychrome.

That struck them all as being a good suggestion, so once more they started to tramp through the forest, taking the direct path to Ku-Klip's house, for both the tin twins knew the way, having followed it many times.

The Tin Woodman of Oz: A Faithful Story of the Astonishing Adventure Undertaken by the Tin Woodman, Assisted by Woot the Wanderer, the Scarecrow of Oz, and Polychrome, the Rainbow's Daughter is the twelfth Land of Oz book written by L. Frank Baum and was originally published on May 13, 1918. The Tin Woodman is unexpectedly reunited with his Munchkin sweetheart Nimmie Amee from the days when he was flesh and blood. This was a back-story from The Wonderful Wizard of Oz.

The book was dedicated to the author's grandson Frank Alden Baum

L. Frank Baum, Writer, born in Chittenango, New York, USA. A sickly child, he studied at home, became an actor (1870s), worked in the family oil business, then moved to South Dakota. While working as a journalist there, he wrote his first book, Father Goose: His Book, published in 1899 after he had moved to Chicago to work on a trade magazine for window decorators. It proved a success; but his next book, The Wonderful Wizard of Oz (1900), was even more successful, and he adapted it for the musical stage in 1901. After travelling to Europe, he settled in Pasadena, CA (1902), where he turned out 13 more books in the Oz series and many other children's stories, mostly in the fantasy genre, using pen names such as Schuyler Staunton, Laura Bancroft, Captain Hugh Fitzgerald, Suzanne Metcalfe, Floyd Akens, and Edith Van Dyne. Although appreciated primarily as children's tales, the Oz books have also been read as incorporating Baum's views on American society.