本杰明·富兰克林自传（外研社双语读库）
The Autobiography of Benjamin Franklin 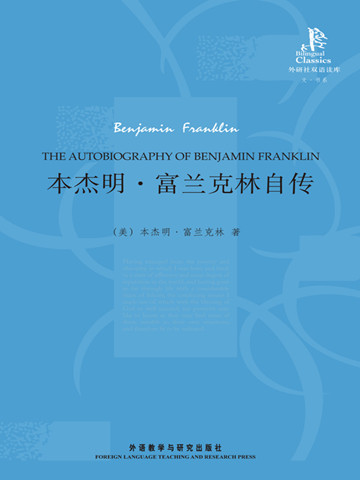 Benjamin Franklin (January 6, 1705– April 17, 1790) was an American polymath and one of the Founding Fathers of the United States. Franklin was a leading author, printer, political theorist, politician, freemason, postmaster, scientist, inventor, humorist, civic activist, statesman, and diplomat. As a scientist, he was a major figure in the American Enlightenment and the history of physics for his discoveries and theories regarding electricity. As an inventor, he is known for the lightning rod, bifocals, and the Franklin stove, among other inventions. He founded many civic organizations, including the Library Company, Philadelphia's first fire department and the University of Pennsylvania.

DEAR SON: I have ever had pleasure in obtaining any little anecdotes of my ancestors. You may remember the inquiries I made among the remains of my relations when you were with me in England, and the journey I undertook for that purpose. Imagining it may be equally agreeable to (After the words "agreeable to" the words "some of " were interlined and afterward effaced.—B.) you to know the circumstances of my life, many of which you are yet unacquainted with, and expecting the enjoyment of a week's uninterrupted leisure in my present country retirement, I sit down to write them for you. To which I have besides some other inducements. Having emerged from the poverty and obscurity in which I was born and bred, to a state of affluence and some degree of reputation in the world, and having gone so far through life with a considerable share of felicity, the conducing means I made use of, which with the blessing of God so well succeeded, my posterity may like to know, as they may find some of them suitable to their own situations, and therefore fit to be imitated.