错误的喜剧（莎士比亚全集·中文重译本）
The Comedy of Errors 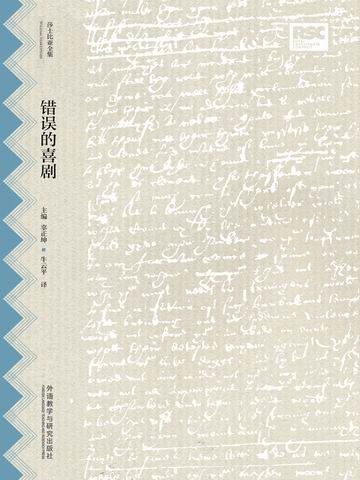 A merchant of Syracuse has identical twin sons. One is stolen at the age of seven. The other’s name is changed to that of the lost boy, in his memory. When grown up, he wanders the Mediterranean in search of his brother, finally chancing upon the seaport where the latter lives. The wanderer encounters the mistress, the wife and other acquaintances of the brother and is inevitably mistaken for him. When he denies all knowledge of the people who greet him, they assume that he is mad and attempt to have him locked up – save that by a further confusion they apprehend the other twin, the one who does know them. The audience awaits the moment of resolution that will come when the twins appear on stage together.

Shakespeare’s The Comedy of Errors is the slapstick farce of his youth. In it, the lost twin sons of the old merchant Egeon—both named Antipholus—find themselves in Ephesus, without either one even knowing of the other’s existence. Meanwhile, Egeon has arrived in search of the son he thinks is still alive—and has been sentenced to death for the “crime” of being from Syracuse. To add to the confusion, the two Antipholuses have twin servants, both named Dromio. As the four men unwittingly encounter each other, the play is crammed with wildly escalating misunderstandings before the truth emerges and Egeon is pardoned.