少雨的土地
The Land of Little Rain 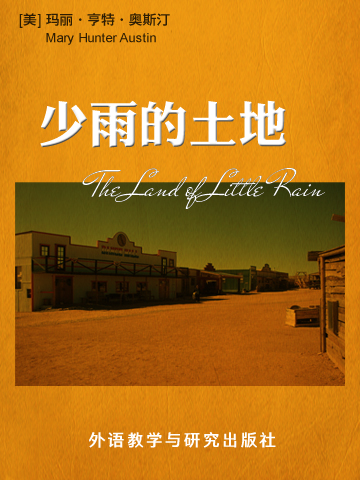 Harper Connelly heads to Doraville, North Carolina, to find a missing boy—one of several teenage boys who have disappeared over the last five years. And all of them are calling for Harper. She finds them, buried in the frozen ground. Soon Harper will learn more than she cared to about the dark mysteries and long-hidden secrets of Doraville—knowledge of the dead that makes her next in line to end up in an ice-cold grave.

Mary Austin (1868-1934) was born in Card Linville, Illinois. Then she came to California in 1887 to homestead with her family in Kern County, in the Great Central Valley. She is the author of many novels, essays, and story collections, including 32 books, 200 more essays and 3 scripts. As an American writer, she is famous for researching California Indians and desert-dwelling. The 14 short essays in The Land of Little Rain established her fame in the literary world.

East away from the Sierras, south from Panamint and Amargosa, east and south many an uncounted mile, is the Country of Lost Borders.

Ute, Paiute, Mojave, and Shoshone inhabit its frontiers, and as far into the heart of it as a man dare go. Not the law, but the land sets the limit. Desert is the name it wears upon the maps, but the Indian's is the better word. Desert is a loose term to indicate land that supports no man; whether the land can be bitted and broken to that purpose is not proven. Void of life it never is, however dry the air and villainous the soil.

This is the nature of that country. There are hills, rounded, blunt, burned, squeezed up out of chaos, chrome and vermilion painted, aspiring to the snowline. Between the hills lie high level-looking plains full of intolerable sun glare, or narrow valleys drowned in a blue haze. The hill surface is streaked with ash drift and black, unweathered lava flows. After rains water accumulates in the hollows of small closed valleys, and, evaporating, leaves hard dry levels of pure desertness that get the local name of dry lakes. Where the mountains are steep and the rains heavy, the pool is never quite dry, but dark and bitter, rimmed about with the efflorescence of alkaline deposits. A thin crust of it lies along the marsh over the vegetating area, which has neither beauty nor freshness. In the broad wastes open to the wind the sand drifts in hummocks about the stubby shrubs, and between them the soil shows saline traces. The sculpture of the hills here is more wind than water work, though the quick storms do sometimes scar them past many a year's redeeming. In all the Western desert edges there are essays in miniature at the famed, terrible Grand Canon, to which, if you keep on long enough in this country, you will come at last.

Since this is a hill country one expects to find springs, but not to depend upon them; for when found they are often brackish and unwholesome, or maddening, slow dribbles in a thirsty soil. Here you find the hot sink of Death Valley, or high rolling districts where the air has always a tang of frost. Here are the long heavy winds and breathless calms on the tilted mesas where dust devils dance, whirling up into a wide, pale sky. Here you have no rain when all the earth cries for it, or quick downpours called cloud-bursts for violence. A land of lost rivers, with little in it to love; yet a land that once visited must be come back to inevitably. If it were not so there would be little told of it.

This is the country of three seasons. From June on to November it lies hot, still, and unbearable, sick with violent unrelieving storms; then on until April, chill, quiescent, drinking its scant rain and scanter snows; from April to the hot season again, blossoming, radiant, and seductive. These months are only approximate; later or earlier the rain-laden wind may drift up the water gate of the Colorado from the Gulf, and the land sets its seasons by the rain.