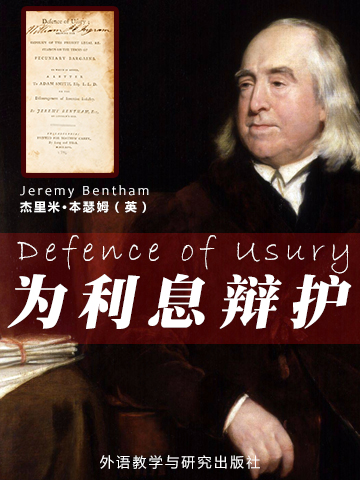 Quere: when capital is plenty, what is the correlative that is comparatively scarce?

Hands adult and in actual readiness to work.

When capital is plenty, interest will be low, and real price of labour high.

When capital is scarce, interest will be high, and the price (real) of labour low, unless kept up by an unnatural occasional demand such as that by war.

What keeps down the quantity, and thence the value of capital is procreation, which multiplies little children who occasion expence before they can produce profit.

These children as they grow up, encrease the number of labourers -- thence they 1. keep down the price of labour, and 2. lessen the ratio of capital to hands.

This book is provided by McMaster University Archive for the History of Economic Thought in its series History of Economic Thought Books with number bentham1787 and published in 1787.The first, I shall mention, is that of precluding so many people, altogether, from the getting the money they stand in need of, to answer their respective exigencies. Think what a distress it would produce, were the liberty of borrowing denied to every body: denied to those who have such security to offer, as renders the rate of interest, they have to offer, a sufficient inducement, for a man who has money, to trust them with it.

Bentham, Jeremy was a British philosopher, jurist, and social reformer. He is regarded as the founder of modern utilitarianism.

Bentham became a leading theorist in Anglo-American philosophy of law, and a political radical whose ideas influenced the development of welfarism. He advocated individual and economic freedom, the separation of church and state, freedom of expression, equal rights for women, the right to divorce, and the decriminalising of homosexual acts. He called for the abolition of slavery, the abolition of the death penalty, and the abolition of physical punishment, including that of children. He has also become known in recent years as an early advocate of animal rights. Though strongly in favour of the extension of individual legal rights, he opposed the idea of natural law and natural rights, calling them "nonsense upon stilts".

Among the various species or modifications of liberty, of which on different occasions we have heard so much in England, I do not recollect ever seeing any thing yet offered in behalf of the liberty of making one's own terms in money-bargains. From so general and universal a neglect, it is an old notion of mine, as you well know, that this meek and unassuming species of liberty has been suffering much injustice. A fancy has taken me, just now, to trouble you with my reasons: which, if you think them capable of answering any good purpose, you may forward to the press: or in the other case, what will give you less trouble, to the fire. In a word, the proposition I have been accustomed to lay down to myself on this subject is the following one, viz. that no man of ripe years and of sound mind, acting freely, and with his eyes open, ought to be hindered, with a view to his advantage, from making such bargain, in the way of obtaining money, as he thinks fit: nor, (what is a necessary consequence) any body hindered from supplying him, upon any terms he thinks proper to accede to. This proposition, were it to be received, would level, you see, at one stroke, all the barriers which law, either statute or common, have in their united wisdom set up, either against the crying sin of Usury, or against the hard-named and little-heard-of practice of Champerty; to which we must also add a portion of the multifarious, and as little heard-of offence, of Maintenance. On this occasion, were it any individual antagonist I had to deal with, my part would be a smooth and easy one. "You, who fetter contracts; you, who lay restraints on the liberty of man, it is for you" (I should say) "to assign a reason for your doing so." That contracts in general ought to be observed, is a rule, the propriety of which, no man was ever yet found wrong-headed enough to deny: if this case is one of the exceptions (for some doubtless there are) which the safety and welfare of every society require should be taken out of that general rule, in this case. as in all those others, it lies upon him, who alledges the necessity of the exception, to produce a reason for it. This, I say, would be a short and very easy method with an individual: but, as the world has no mouth of its own to plead by, no certain attorney by which it can "come and defend this force and injury," I must even find arguments for it at a venture, and ransack my own imagination for such phantoms as I can find to fight with. In favour of the restraints opposed to the species of liberty I contend for, I can imagine but five arguments. 1. Prevention of usury. 2. Prevention of prodigality. 3. Protection of indigence against extortion. 4. Repression of the temerity of projectors. 5. Protection of simplicity against imposition. Of all these in their order.