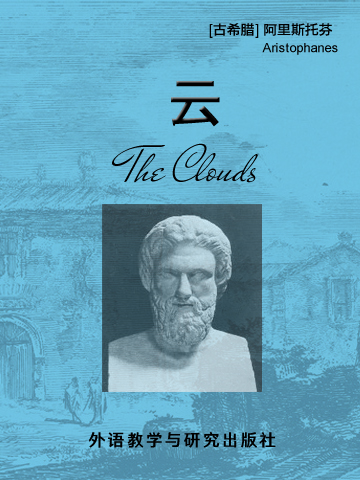 GREAT gods! will these nights never end? will daylight never come? I heard the cock crow long ago and my slaves are snoring still! Ah! Ah! It wasn't like this formerly. Curses on the war! has it not done me ills enough? Now I may not even chastise my own slaves. Again there's this brave lad, who never wakes the whole long night, but, wrapped in his five coverlets, farts away to his heart's content. (He lies down) Come! let me nestle in well and snore too, if it be possible....oh! misery, it's vain to think of sleep with all these expenses, this stable, these debts, which are devouring me, thanks to this fine cavalier, who only knows how to look after his long locks, to show himself off in his chariot and to dream of horses! And I, I am nearly dead, when I see the moon bringing the third decade in her train and my liability falling due....Slave! light the lamp and bring me my tablets. (The slave obeys.) Who are all my creditors? Let me see and reckon up the interest. What is it I owe?....Twelve minae to Pasias....What! twelve minae to Pasias?....Why did I borrow these? Ah! I know! It was to buy that thoroughbred, which cost me so much. How I should have prized the stone that had blinded him!

PHIDIPPIDES (in his sleep)

That's not fair, Philo! Drive your chariot straight, I say.

This is what is destroying me. He raves about horses, even in his sleep.

How many times round the track is the race for the chariots of war?

It's your own father you are driving to death....to ruin. Come! what debt comes next, after that of Pasias?....Three minae to Amynias for a chariot and its two wheels.

Give the horse a good roll in the dust and lead him home.

Ah! wretched boy! it's my money that you are making roll. My creditors have distrained on my goods, and here are others again, who demand security for their interest.

What is the matter with you, father, that you groan and turn about the whole night through?

The Clouds is a comedy written by the celebrated playwright Aristophanes lampooning intellectual fashions in classical Athens. It was originally produced at the City Dionysia in 423 BC and it was not well received, coming last of the three plays competing at the festival that year. It was revised between 420-417 BC and thereafter it was circulated in manuscript form. No copy of the original production survives, and scholarly analysis indicates that the revised version is an incomplete form of Old Comedy. This incompleteness, however, is not obvious in translations and modern performances. The Clouds can be considered not only the world's first extant 'comedy of ideas' but also a brilliant and successful example of that genre. The play gained notoriety for its caricature of Socrates ever since its mention in Plato's Apology as a factor contributing to the philosopher's trial and execution.

Aristophanes (c. 446 BC – c. 386 BC), son of Philippus, of the deme Cydathenaus, was a comic playwright of ancient Athens. Eleven of his thirty plays survive virtually complete. These, together with fragments of some of his other plays, provide the only real examples of a genre of comic drama known as Old Comedy, and they are used to define the genre Also known as the Father of Comedy and the Prince of Ancient Comedy, Aristophanes has been said to recreate the life of ancient Athens more convincingly than any other author. His powers of ridicule were feared and acknowledged by influential contemporaries; Plato singled out Aristophanes' playThe Clouds as slander that contributed to the trial and subsequent condemning to death of Socrates although other satirical playwrights had also caricatured the philosopher. His second play, The Babylonians (now lost), was denounced by the demagogue Cleon as a slander against the Athenian polis. It is possible that the case was argued in court but details of the trial are not recorded and Aristophanes caricatured Cleon mercilessly in his subsequent plays, especially The Knights, the first of many plays that he directed himself. "In my opinion," he says through the Chorus in that play, "the author-director of comedies has the hardest job of all."