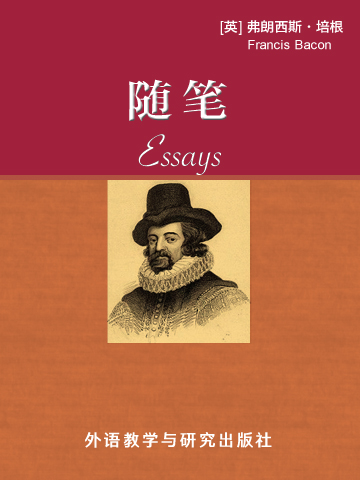 WHAT is truth? said jesting Pilate,and would not stay for an answer. Certainly there be, that delight in giddiness, and count it a bondage to fix a belief; affecting free-will in thinking, as well as in acting. And though the sects of philosophers of that kind be gone, yet there remain certain dis- coursing wits, which are of the same veins, though there be not so much blood in them, as was in those of the ancients. But it is not only the difficulty and labor, which men take in finding out of truth, nor again, that when it is found, it imposeth upon men's thoughts, that doth bring lies in favor; but a natural, though corrupt love, of the lie itself. One of the later school of the Grecians, examineth the matter, and is at a stand, to think what should be in it, that men should love lies; where neither they make for pleasure, as with poets, nor for advan- tage, as with the merchant; but for the lie's sake. But I cannot tell; this same truth, is a naked, and open day-light, that doth not show the masks, and mummeries, and triumphs, of the world, half so stately and daintily as candle-lights. Truth may perhaps come to the price of a pearl, that showeth best by day; but it will not rise to the price of a diamond, or carbuncle, that showeth best in varied lights. A mixture of a lie doth ever add pleasure. Doth any man doubt, that if there were taken out of men's minds, vain opinions, flattering hopes, false valuations, imaginations as one would, and the like, but it would leave the minds, of a number of men, poor shrunken things, full of melancholy and indisposition, and unpleasing to themselves?

Although he had a distinguished career as a lawyer and statesman, Francis Bacon's lifelong goal was to improve and extend human knowledge. In The Advancement of Learning (1605) he made a brilliant critique of the deficiencies of previous systems of thought and proposed improvements to knowledge in every area of human life. He conceived the Essays (1597, much enlarged in 1625) as a study of the formative influences on human behaviour, psychological and social. In The New Atlantis (1626) he outlined his plan for a scientific research institute in the form of a Utopian fable. In addition to these major English works this edition includes 'Of Tribute', an important early work here printed complete for the first time, and a revealing selection of his legal and political writings, together with his poetry. A special feature of the edition is its extensive annotation which identifies Bacon's sources and allusions, and glosses his vocabulary. ABOUT THE SERIES: For over 100 years Oxford World's Classics has made available the widest range of literature from around the globe. Each affordable volume reflects Oxford's commitment to scholarship, providing the most accurate text plus a wealth of other valuable features, including expert introductions by leading authorities, helpful notes to clarify the text, up-to-date bibliographies for further study, and much more.

Francis Bacon, 1st Viscount St. Alban, QC (22 January 1561 – 9 April 1626), was an English philosopher, statesman, scientist, jurist, orator, essayist, and author. He served both as Attorney General and Lord Chancellor of England. After his death, he remained extremely influential through his works, especially as philosophical advocate and practitioner of the scientific method during the scientific revolution.

Bacon has been called the creator of empiricism. His works established and popularised inductive methodologies for scientific inquiry, often called the Baconian method, or simply the scientific method. His demand for a planned procedure of investigating all things natural marked a new turn in the rhetorical and theoretical framework for science, much of which still surrounds conceptions of proper methodology today.

Bacon was knighted in 1603 (being the first scientist to receive a knighthood), and created Baron Verulam in 1618 and Viscount St. Alban in 1621; as he died without heirs, both peerages became extinct upon his death. He famously died by contracting pneumonia while studying the effects of freezing on the preservation of meat.