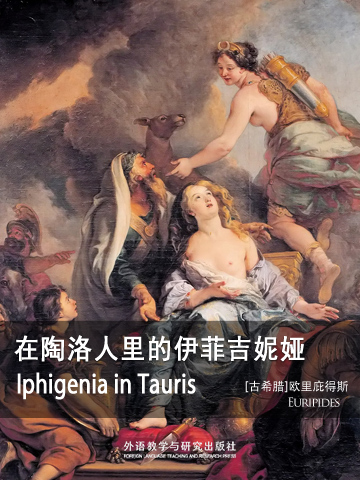 Iphigenia in Tauris tells the story of the princess Iphigenia who was sacrificed by her father Agamemnon to expedite his campaign against Troy but was rescued by the goddess Artemis and transported to the land of the Taurians. There she herself must perform human sacrifices as a priestess of Artemis in the local cult. Troy has now been sacked, and Agamemnon murdered by his wife and avenged by his son Orestes. With his motherAes blood on his hands, Orestes is guided by Apollo to seek purification through bringing the image of the Tauric Artemis to Greece, and so is reunited with his sister. The drama centers on IphigeniaAes near-sacrifice at OrestesAe hands, their recognition in the nick of time, and their ingenious and thrilling escape to bring the cult of Artemis to Halae and Brauron near Athens.

Iphigenia in Tauris is a drama by the playwright Euripides, written between 414 BC and 412 BC. It has much in common with another of Euripides’s plays, Helen, as well as the lost play Andromeda, and is often described as a romance, a melodrama, a tragi-comedy or an escape play.

Euripides (c. 480–406 BC) was one of the three great tragedians of classical Athens, the other two being Aeschylus and Sophocles. Some ancient scholars attributed ninety-five plays to him but according to the Suda it was ninety-two at most. Of these, eighteen or nineteen have survived more or less complete (there has been debate about his authorship of Rhesus, largely on stylistic grounds) and there are also fragments, some substantial, of most of the other plays. More of his plays have survived intact than those of Aeschylus and Sophocles together, partly due to mere chance and partly because his popularity grew as theirs declined—he became, in the Hellenistic Age, a cornerstone of ancient literary education, along with Homer, Demosthenes and Menander.