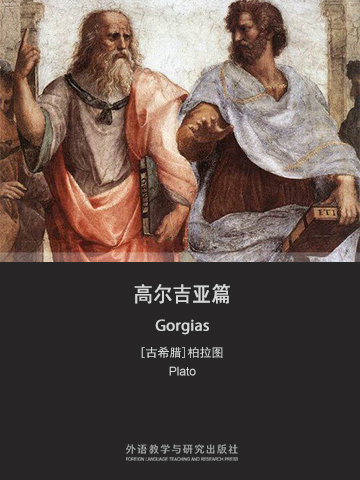 The dialogue begins just after Gorgias has given a speech. Callicles says that Gorgias is a guest in his home, and has agreed to a private audience with Socrates and his friend Chaerephon. Socrates gets Gorgias to agree to his cross-examination style of conversation, asks him questions, and praises him for the brevity of his replies. Gorgias remarks that no one has asked him a new question in a long time, and when Socrates asks, he assures him that he is just as capable of brevity as of long-windedness (449c).

Gorgias (Greek: Γοργίας) is a Socratic dialogue written by Plato around 380 BC. In this dialogue, Socrates seeks the true definition of rhetoric, attempting to pinpoint the essence of rhetoric and unveil the flaws of the sophistic oratory popular in Athens at this time. The art of persuasion was widely considered necessary for political and legal advantage in classical Athens, and rhetoricians promoted themselves as teachers of this fundamental skill. Some, like Gorgias, were foreigners attracted to Athens because of its reputation for intellectual and cultural sophistication. In the Gorgias, Socrates argues that philosophy is an art, whereas rhetoric is a skill based on mere experience. To Socrates, most rhetoric in practice is merely flattery. In order to use rhetoric for good, rhetoric cannot exist alone; it must depend on philosophy to guide its morality. Socrates, therefore, believes that morality is not inherent in rhetoric and that without philosophy, rhetoric is simply used to persuade for personal gain. Socrates suggests that he is one of the few (but not only) Athenians to practice true politics (521d).

Classical Greek philosopher, who together with his teacher, Socrates, and his student, Aristotle, helped to lay the philosophical foundations of Western culture.