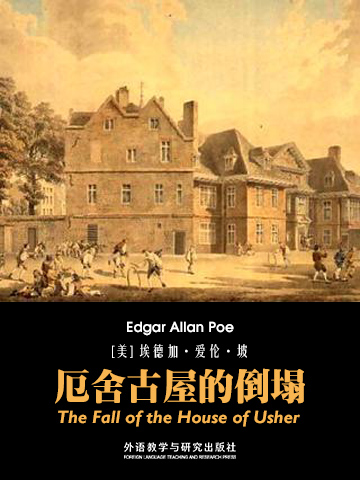 厄舍古屋的倒塌
The Fall of the House of Usher

"The Fall of the House of Usher" is a short story by Edgar Allan Poe first published in 1839. In The Fall of the House of Usher a visitor realizes that there is a terrible malady within the house. When the narrator arrives at his friend's house he realizes that Usher is ill. His symptoms include hyperesthsia (hyper sensitivity to light, sound, and smells), and acute anxiety. Usher believes that the house can feel and sense things. The story progresses and the plot winds and twists until the reader is caught up in this malevolent house. This is a story not to be read on a stormy night while sitting alone in an old squeaky house with shadows!

Edgar Allan Poe (January 19, 1809 – October 7, 1849) was an American author, poet, editor, and literary critic, considered part of the American Romantic Movement. Best known for his tales of mystery and the macabre, Poe was one of the earliest American practitioners of the short story, and is generally considered the inventor of the detective fiction genre. He is further credited with contributing to the emerging genre of science fiction. He was the first well-known American writer to try to earn a living through writing alone, resulting in a financially difficult life and career.