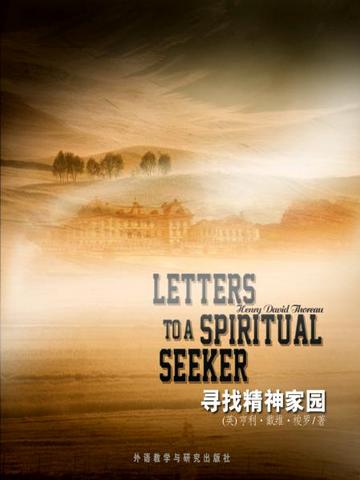 寻找精神家园（外研社双语读库）
Letters to a Spiritual Seeker

Henry David Thoreau is famous for the literary excellence of his political and nature writings. But his friend Harrison Blake understood that the "true significance of [Thoreau's] life" was in fact spiritual, and he presciently asked the then-little-known Thoreau for guidance in finding a path of his own. The result was a regular exchange of letters for the remaining thirteen years of Thoreau's life, charting the evolution of his skills as a writer and thinker. The possibilities and limits of spirituality, the role of vocation in developing one's spiritual life, the importance of a direct relationship between the individual and God —Thoreau discusses these and more in his letters to Blake.

The writing of Henry David Thoreau is as full of life today as it was when he published Waldenone hundred years ago. In seeking to understand nature, Thoreau sought to "lead a fresh, simple life with God." In 1848 a seeker named Harrison Blake, yearning for a spiritual life of his own, asked the then-fledgling writer for guidance. The fifty letters that ensued are earnest, oracular, witty, playful, practical—and deeply insightful and inspiring, as one would expect from America's best prose stylist and great moral philosopher.

Henry David Thoreau (July 12, 1817—May 6, 1862) was an American author, poet, philosopher, naturalist, development critic, historian, and leading transcendentalist. He is best known for his book Walden, a reflection upon simple living in natural surroundings, and his essay Civil Disobedience, an argument for individual resistance to civil government in moral opposition to an unjust state. Among his lasting contributions were his writings on natural history and philosophy, where he anticipated the methods and findings of ecology and environmental history, two sources of modern day environmentalism.