双城记（第4级）（书虫·牛津英汉双语读物）
A Tale of Two Cities 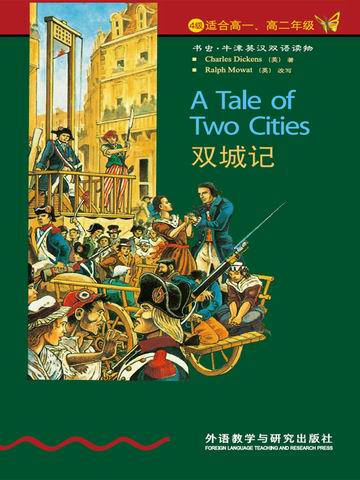 The novel depicts the plight of the French peasantry demoralized by the French aristocracy in the years leading up to the revolution, the corresponding brutality demonstrated by the revolutionaries toward the former aristocrats in the early years of the revolution, and many unflattering social parallels with life in London during the same period.

A Tale of Two Cities (1859) is a novel by Charles Dickens, set in London and Parisbefore and during the French Revolution. Dickens's classic tale of the French Revolution brings to life a time of terror and treason, and chronicles a starving people who rise in frenzy and hate to overthrow a corrupt and decadent regime.

Charles Dickens (7 February 1812 – 9 June 1870) was an English writer and social critic. He created some of the world's best-known fictional characters and is regarded by many as the greatest novelist of the Victorian era. His works enjoyed unprecedented popularity during his lifetime, and by the twentieth century critics and scholars had recognised him as a literary genius. His novels and short stories enjoy lasting popularity. His most famous works are A Tale of Two Cities, Oliver Twist and Great Expectations.

It was the best of times, it was the worst of times. It was the season of light, it was the season of darkness.It was the spring of hope, it was the winter of despair. It was the year one thousand seven hundred and seventy-five. In France there was a King and a Queen, and in England there was a King and a Queen. They believed that nothing would ever change. But in France things were bad, and getting worse. The people were poor, hunry and unhappy. The King made paper money and spent it, and the people had nothing to eat. Behind closed doors in the home of the people, voices spoke in whispers against the King and his noblemen; they were only whispers, but they were the angry whispers of desperate people.