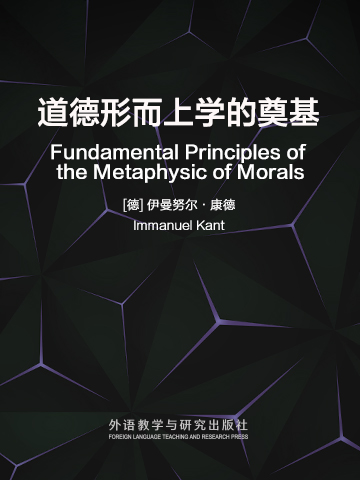 道德形而上学的奠基
Fundamental Principles of the Metaphysic of Morals

Fundamental Principles of the Metaphysic of Morals is the first of Immanuel Kant's mature works on moral philosophy and remains one of the most influential in the field. Kant purposes to lay bare the fundamental principle of morality and show that it applies to us. Central to the work is the role of what Kant refers to as the categorical imperative, the concept that one must act only according to that precept which he or she would will to become a universal law. He provides a groundbreaking argument that the rightness of an action is determined by the principle that a person chooses to act upon.

Immanuel Kant (22 April 1724 – 12 February 1804) was a German philosopher and one of the central Enlightenment thinkers. Kant's comprehensive and systematic works in epistemology, metaphysics, ethics, and aesthetics have made him one of the most influential figures in modern Western philosophy. Kant believed that reason is also the source of morality, and that aesthetics arise from a faculty of disinterested judgment. Kant's views continue to have a major influence on contemporary philosophy, especially the fields of epistemology, ethics, political theory, and post-modern aesthetics.