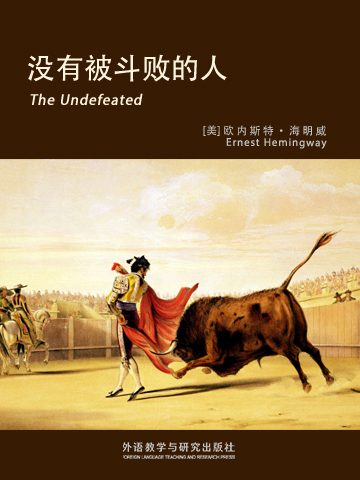 Similar to Hemingway's typical works, The Undefeated shapes a figure of a "tough guy". The narrator describes many exciting scenes in the bullring, which draws readers' attention to the story and make them feel the pause of time. In such way, the story is in a nervous atmosphere.

The Undefeated tells that the protagonist runs into a picador when he goes to find the bullfighter hirer. "He is undefeated" is the topic, and it is underlined by the description of the fight in the bullring.

Ernest Miller Hemingway (July 21, 1899–July 2, 1961) was an American novelist, short story writer, and journalist. His economical and understated style had a strong influence on 20th-century fiction, while his life of adventure and his public image influenced later generations. Hemingway produced most of his work between the mid-1920s and the mid-1950s, and won the Nobel Prize in Literature in 1954. He published seven novels, six short story collections, and two non-fiction works. Additional works, including three novels, four short story collections, and three non-fiction works, were published posthumously. Many of his works are considered classics of American literature.