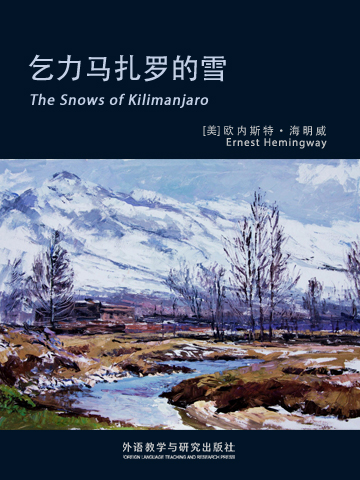 乞力马扎罗的雪
The Snows of Kilimanjaro

The Snows of Kilimanjaro is considered to be one of the Hemingway's greatest works. The author describes this story in two opposite ways. One way is when the protagonist is awake, and the other is when he is asleep. Through such ways, Hemingway gave a full description of death.

The Snows of Kilimanjaro is a novella, which describes a man's experience of the time when death is imminent. In the story, a writer named Harry goes to Africa to go hunting. However, his car breaks down on the way. What's worse, his skin is lacerated, causing the gangrenosis. His lover and he have to wait for a helicopter, which will take them to the hospital. The story centers on the topic of death, but the essential topic is Harry's recollections. Harry wants to set down his experiences with different women. He also wants to write down what he has pursued in his career. In the end of this story, he is dead. And he dreams of flying to the highest mountain-Kilimanjaro.

Ernest Miller Hemingway (July 21, 1899–July 2, 1961) was an American novelist, short story writer, and journalist. His economical and understated style had a strong influence on the 20th-century fiction. His life of adventure and his public image influenced later generations. Hemingway produced most of his work between the mid-1920s and the mid-1950s, and won the Nobel Prize in Literature in 1954. He published seven novels, six short story collections, and two non-fiction works. Additional works, including three novels, four short story collections, and three non-fiction works, were published posthumously. Many of his works are considered classics of American literature.