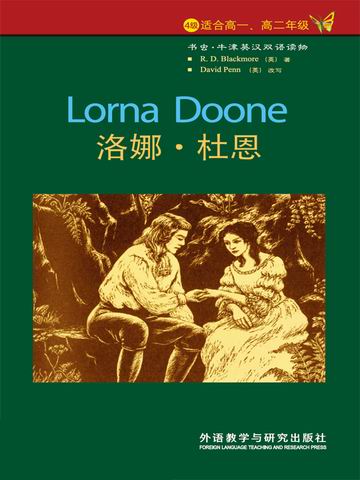 The Doones are hated and feared all over Exmoor. When they ride out from Doone valley to steal and rob from the local farms, no one can stop them. They are wild, strong men, and anyone who tries to fight them will soon be murdered. Like John Ridd's father, shot down while riding home from market. And in these lawless days only the King's soldiers can punish the Doones, but the King is far away in London and has troubles of his own. As John grows up, he works hard on the farm and dreams of revenge for his father's death. But one day he meets Lorna Doone. She is the girl of his dreams—gentle, beautiful, loving—and John loses his heart to her. But how can he marry a girl from the hated Doone family? And then there is Carver Doone, the most evil and dangerous of all the Doones, who plans to marry Lorna himself...

Lorna Doone is a novel by English author Richard Doddridge Blackmore, published in 1869. It is a romance based on a group of historical characters and set in the late 17th century in Devon and Somerset, particularly around the East Lyn Valley area of Exmoor.

Richard Doddridge Blackmore (7 June 1825 – 20 January 1900), known as R.D.Blackmore, was one of the most famous English novelists of the second half of the nineteenth century. He won acclaim for vivid descriptions and personification of the countryside, sharing with Thomas Hardy a Western England background and a strong sense of regional setting in his works. Blackmore, often referred to as the "Last Victorian", was a pioneer of the movement in fiction who has been described as "proud, shy, reticent, strong-willed, sweet-tempered, and self-centred." Apart from his novel Lorna Doone, which has enjoyed continuing popularity, his work has gone out of print.

I am John Ridd, a farmer of the village of Oare in Somerset, and I have a story to tell you. It is about some things that happened to me in my younger days. On the 29th November 1673, when I was twelve years old, John Fry, a worker from our family's farm, came to collect me from my school at Tiverton. He rode his horse up to the gate, leading my own little horse behind him. He was two weeks early, so I knew something was wrong.