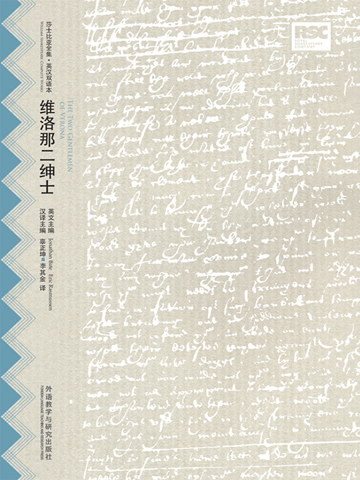 维洛那二绅士（莎士比亚全集•英汉双语本）
The Two Gentlemen of Verona

The Two Gentlemen of Verona is one of Shakespeare’s early plays, perhaps even his first. We do not know exactly when it was written or first performed, but its stylistic and dramatic features distinguish it as early work: a small cast, a preponderance of end-stopped verse lines, a degree of simplicity in both language and characterization. Though the play has the relative superficiality of youth, it also has the virtues of that time of life: freshness, energy, pace, wholeheartedness, a desire to get to the point and to speak its mind. It is about the things that matter most urgently to young people: themselves, their friendships and their love affairs. It makes its drama out of the conflicts between these things: how can you be simultaneously true to yourself, to your best friend and to the object of your sexual desire? Especially if the person you’ve fallen in love with happens to be your best friend’s girlfriend.

The Two Gentlemen of Verona is a comedy that many believe was Shakespeare's first play. The play is also notable for its themes of friendship and infidelity.