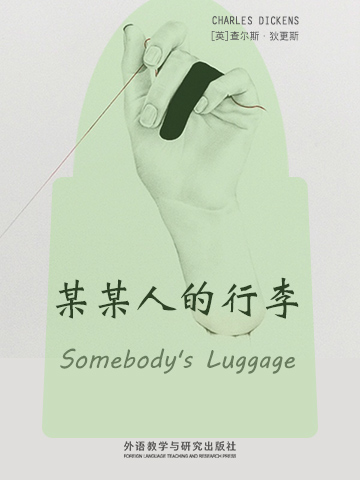 Somebody's Luggage is a collection of interlinked stories first published in 'All the Year Round' in 1862. Charles Dickens writes the opening tale and two others. The introductory first part 'His Leaving It Till Called For' (Dickens) is spoken by a waiter-employee who discovers a collection of forgotten luggage under a bed. Then follows a sequence of tales each connected–very loosely, tenuously–to various items of the luggage. 'His Boots' (Dickens) is a rather sentimental tale about a soldier and a little girl. 'His Umbrella'(John Oxenford) is a ghost story in which a man is haunted by a 'possessed' umbrella. 'His Black Bag' and 'His Writing Desk' (Charles Alston Collins–brother of Wilkie Collins & Dickens' son-in-law) are two connected tales which begin as a rather good country-house comedy which then turns tragic. 'His Dressing Case' (Arthur Locker) is a tall-tale in which shipwrecked passengers find themselves living on an iceberg. 'His Brown Paper Parcel' (Dickens) is the story of a pavement artist. 'His Portmanteau' and 'His Hat Box' (Julia Cecilia Stretton) are connected whimsical stories about an enchanted chair which causes its occupants to tell the absolute truth. These might have been written by W.S. Gilbert. The final tale 'His Wonderful End' (Dickens) tells how the above stories, assumed to have been written by the luggage-owner, are published by the Waiter and the owner of the luggage turns up. 'Somebody's Luggage's an entertaining read and very interesting for the light it throws on some popular Victorian authors other than Dickens and Victorian literary taste. Dickens' contributions, it goes almost without saying, stand out for their energy and imagination, but the others efforts are by no mens negligible, are accomplished pieces of writing and extremely readable. Hesperus Books are to be congratulated and thanked for publishing several of these story collections from 'All The Year Round' in their entirety.

"My family-name is Blue-Beard I'm going to open Somebody's Luggage all alone in the Secret Chamber—and not a female eye catches sight of the contents." Such a mystery On the first day of the year 1857, a man left his inn and requested his luggage be ready when he called for it—then never called. Nor paid his small bill. Christopher, a Waiter (one of a large family of Waiters, dignified and dedicated in their trade) is made the offer years later—won't he pay the small bill? And have the mystery all to himself? In this delightful tale from Dickens, Christopher discovers more than just ordinary travel-goods, when he opens those long-locked valises

Charles John Huffam Dickens (7 February 1812-9 June 1870) was an English writer and social critic. He created some of the world's most well-known fictional characters and is generally regarded as the greatest novelist of the Victorian period. During his life, his works enjoyed unprecedented popularity, and by the twentieth century he was widely seen as a literary genius by critics and scholars. His novels and short stories continue to be widely popular.