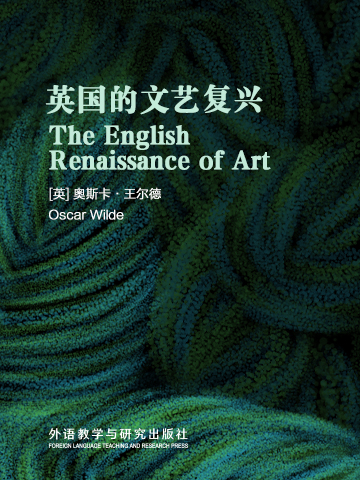 英国的文艺复兴
The English Renaissance of Art

As a lecturer, Wilde gives full play to his gift in eloquence. Sometimes he released his emotions in a torrent of words, citing from classics, and sometimes made witty remarks, with exceeding sarcasm. This lecture of more than ten thousand words is full of wit and humor.

The English Renaissance of Art is a lecture made by the author in the Chickering Hall of New York in January 9th of 1882. Wilde looks upon the aesthetic movement in England as a new renaissance. The author has made an elaboration as to the reason of the rise of the movement, its development direction, and its significance and impact. Although the author has expressed his ideas of art for art's sake, he does not divorce art from life. He feels it necessary to re-clarify the meaning of aesthetic art to people's lives.

Oscar Wilde (16 October 1854—30 November 1900) was an Irish writer, poet and essayist. After writing in different forms throughout the 1880s, he became one of London's most popular playwrights in the early 1890s. Today he is remembered for his epigrams, plays and the circumstances of his imprisonment, followed by his early death. As a playwright he was on a par with Bernard Shaw. He is a particularly enthusiastic advocate of aesthetic art movement. At the turn of the 1890s, he refined his ideas about the supremacy of art in a series of dialogues and essays. The English Renaissance of Art is a lecture made by the author in the Chickering Hall of New York in January 9th of 1882.