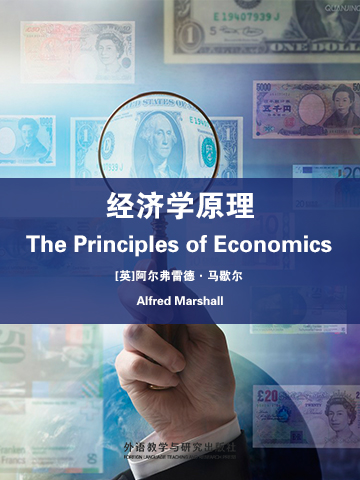 经济学原理
The Principles of Economics

Marshall's influence on modifying economic thought is difficult to deny. He popularized the use of supply and demand functions as tools of price determination (previously discovered independently by Cournot); modern economists owe the linkage between price shifts and curve shifts to Marshall. Marshall was an important part of the "marginalist revolution;" the idea that consumers attempt to adjust consumption until marginal utility equals the price was another of his contributions. The price elasticity of demand was presented by Marshall as an extension of these ideas. Economic welfare, divided into producer surplus and consumer surplus, was contributed by Marshall, and indeed, the two are sometimes described eponymously as 'Marshallian surplus.' He used this idea of surplus to rigorously analyze the effect of taxes and price shifts on market welfare. Marshall also identified quasi-rents.

Principles of Economicsis a leading political economy or economics textbook of Alfred Marshall (1842–1924), first published in 1890. It ran into many editions and was the standard text for generations of economics students.

Alfred Marshall (26 July 1842–13 July 1924) was one of the most influential economists of his time. His book, Principles of Economics (1890), was the dominant economic textbook in England for many years. It brings the ideas of supply and demand, marginal utility, and costs of production into a coherent whole. He is known as one of the founders of economics.