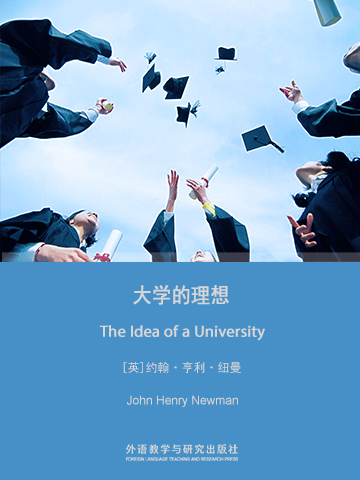 大学的理想
The Idea of a University

Regarded as the most important book on education ever written, The Idea of a University is a living classic that defines for groping, late-20th Century souls what it truly means to be educated.

The issues that John Henry Newman raised--the place of religion and moral values in the university setting, the competing claims of liberal and professional education, the character of the academic community, the cultural role of literature, the relation of religion and science--have provoked discussion from Newman's time to our own.

"The aim of the University is a true enlargement of mind... the power of viewing many things at once."

Though a century and a half has passed since John Henry Newman delivered the lectures which provide the basis for The Idea of a University, the prescription he served up is more relevant today than during the Victorian era.

Newman wrote and delivered these addresses upon becoming the first rector of the newly founded Catholic University of Ireland in Dublin. His vision shaped that school, and helped inform the modern understanding of what a university education should encompass.

Blessed John Henry Newman CO (21 February 1801–11 August 1890), also referred to as Cardinal Newman, was an important figure in the religious history of England in the 19th century. He was known nationally by the mid-1830s.

Originally an evangelical Oxford academic and priest in the Church of England, Newman was a leader in the Oxford Movement. This influential grouping of Anglicans wished to return the Church of England to many Catholic beliefs and forms of worship traditional in the medieval times to restore ritual expression. In 1845 Newman left the Church of England and was received into the Catholic Church. In 1879, he was created cardinal by Pope Leo XIII in recognition of his services to the cause of religion in England. Hitherto, in modern times, no simple priest, without duties in the Roman Curia, had been raised to the Sacred College. Newman’s elevation was hailed by the English nation and by Catholics everywhere with unexampled enthusiasm. It broke down the wall of partition between the See of Rome and England. He was instrumental in the founding of the Catholic University of Ireland, which evolved into University College, Dublin, today the largest university in Ireland.