大师经典文库：孟子（汉英对照）
The Works of Mencius 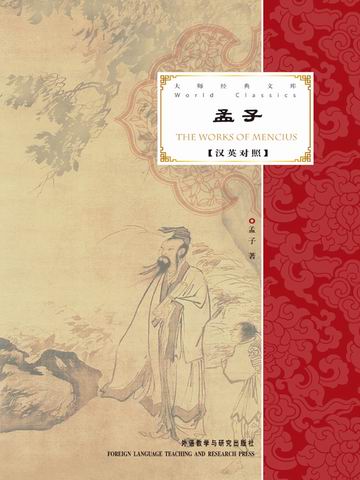 Mencius's interpretation of Confucianism has generally been considered the orthodox version by subsequent Chinese philosophers, especially by the Neo-Confucians of the Song dynasty. Mencius's disciples included a large number of feudal lords, and he was actually more influential than Confucius had been. The Mencius (also spelled Mengzi or Meng-tzu), a book of his conversations with kings of the time, is one of the Four Books that Zhu Xi grouped as the core of orthodox Neo-Confucian thought. In contrast to the sayings of Confucius, which are short and self-contained, the Mencius consists of long dialogues, including arguments, with extensive prose.

The Mencius (Chinese: 孟子; pinyin: Mèngzǐ), commonly called the Mengzi, is a collection of anecdotes and conversations of the Confucian thinker and philosopher Mencius. The work dates from the second half of the 4th century BC. It was ranked as a Confucian classic and its status was elevated in Song Dynasty. Zhu Xi, the scholar generally credited with the founding of Neo-Confucianism, included the Mengzi as one of the Four Books, and it became one of the canonical texts of Neo-Confucianism.