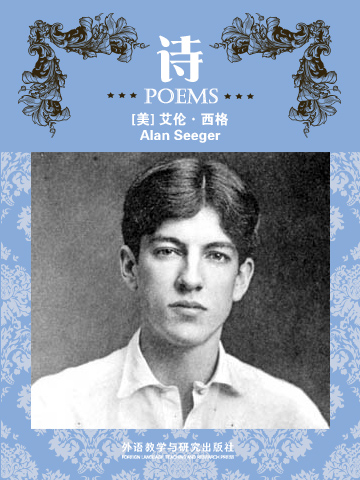 Seeger's poetry was published by Charles Scribner's Sons in December 1916 with a 46 page introduction by William Archer. Poems, a collection of his works, was relatively unsuccessful, due, according to Eric Homberger, to its lofty idealism and language, qualities out of fashion in the early decades of the 20th century.

Poems was reviewed in The Egoist, where the critic—T. S. Eliot, Seeger's classmate at Harvard—commented that, Seeger was serious about his work and spent pains over it. The work is well done, and so much out of date as to be almost a positive quality. It is high-flown, heavily decorated and solemn, but its solemnity is thorough going, not a mere literary formality. Alan Seeger, as one who knew him can attest, lived his whole life on this plane, with impeccable poetic dignity; everything about him was in keeping.

Alan Seeger (22 June 1888 – 4 July 1916) was an American poet who fought and died in World War I during the Battle of the Somme serving in the French Foreign Legion. Seeger was the uncle of American folk singer Pete Seeger, and was a classmate of T.S. Eliot at Harvard. He is most well known for having authored the poem, I Have a Rendezvous with Death, a favorite of President John F. Kennedy. A statue modeled after Seeger is found on the monument honoring fallen Americans who volunteered for France during the war, located at the Place des États-Unis, Paris. He is sometimes called the "American Rupert Brooke."

This book contains the undesigned, but all the more spontaneous and authentic, biography of a very rare spirit. It contains the record of a short life, into which was crowded far more of keen experience and high aspiration—of the thrill of sense and the rapture of soul—than it is given to most men, even of high vitality, to extract from a life of twice the length.