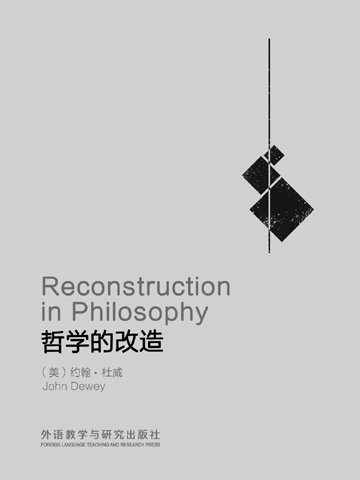 Written as lectures, Reconstruction in Philosophy is less dry than other philosophical tracts. The author tried to link his philosophy thought with the life and economy in the process of American industrialization and make it practical, which reflected the need of American bourgeoisie to pursue practical interests. He argued that our philosophical constructions are not based in reason, but only use higher thinking to justify themselves, and that we might find better ways of living if we examine our deepest beliefs and feelings with an eye toward their ultimate effects on us and others.

John Dewey was an American philosopher, psychologist and educational reformer whose ideas have been influential in education and social reform. He was an important early developer of the pragmatism and one of the founders of functional psychology, as well as a major representative of progressive education and liberalism. Although Dewey is known best for his publications concerning education, he also wrote about many other topics, including science, art, politics, sociology, history and economics.

Man differs from the lower animals because he preserves his past experiences. What happened in the past is lived again in memory. About what goes on today hangs a cloud of thoughts concerning similar things undergone in bygone days. With the animals, an experience perishes as it happens, and each new doing or suffering stands alone. But man lives in a world where each occurrence is charged with echoes and reminiscences of what has gone before, where each event is a reminder of other things.