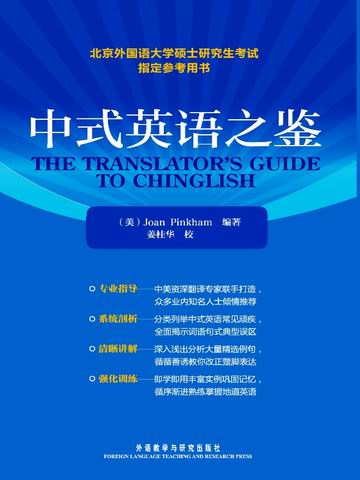 中式英语之鉴
The Translator's Guide to Chinglish

This book can be used either in the classroom or for independent study. It is addressed primarily to Chinese translators and to advanced students of English who are practicing translation. Naturally, readers who open this book will have reached varying levels of skill in their second language. But to one degree or another, the work of all but the most highly trained and experienced among them will inevitably contain elements of Chinglish. Chinglish, of course, is that misshapen, hybrid language that is neither English nor Chinese but that might be described as "English with Chinese characteristics." The purpose of the book is rather to show translators—and, by extension, others who are writing directly in English—how to recognize elements of Chinglish in a first draft and how to revise it so as to eliminate those elements. In other words, this book is intended to help them turn their work into real English such as might have been written by an educated native speaker of the language.