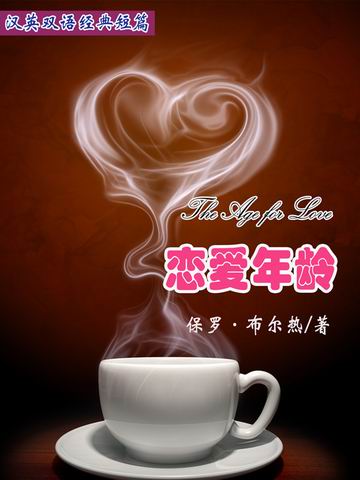 恋爱年龄
The Age for Love

Paul Charles Joseph Bourget ( 2 September 1852 – 25 December 1935) was a French novelist and critic.He was born in Amiens in the Somme département of Picardy, France. His father, a professor of mathematics, was later appointed to a post in the college at Clermont-Ferrand, where Bourget received his early education. He afterwards studied at the Lycée Louis-le-Grand and at the École des Hautes Études. During 1872–1873 he produced a volume of verse, Au Bord de la Mer, which was followed by others, the last, Les Aveux, appearing in 1882. Meanwhile he was making a name in literary journalism, and in 1883 he published Essais de Psychologie Contemporaine, studies of eminent writers first printed in the Nouvelle Revue, and now brought together. In 1884 Bourget paid a long visit to Britain, where he wrote his first published story (L'Irréparable). Cruelle Enigme followed in 1885; then André Cornelis (1886) and Mensonges (1887) - inspired by Octave Mirbeau's life - were received with much favour