蒙特罗斯传奇
A Legend of Montrose 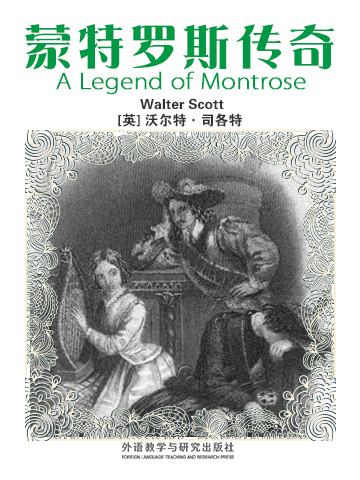 "A Legend of Montrose" was originally published in the same year as "The Bride of Lammermoor" and was Scott's last Scottish novel before he turned to "Ivanhoe" and more general historical themes. Ostensibly, the story is about the battles between Highland royalists and their Presbyterian or Covenanter counterparts at the time of the Civil War (in the 1640's). The Earl of Montrose leads an army of Highland "gillies" under the command of their clan leaders through various adventures in Perthshire, Argyle and further to the north. The climax is the battle between Montrose's forces and those led by the Duke of Argyle. However, Scott would not be Scott if he did not weave a fascinating pattern of more personal interest. The central character here is Dugald Dalgetty, a verbose and opinionated ex-mercenary who falls in with Montrose's army and plays a leading role in the campaign. We also meet the Earl of Menteith and follow the history of his love for Annot Lyle, an orphan who has been befriended and is also loved by the younger brother of the Highland chieftain Angus M'Aulay.

The story takes place during the Earl of Montrose's 1644-5 Highland campaign on behalf of King Charles I against the Covenanters who had sided with the English Parliament in the English Civil War. The main plot concerns a love triangle between Allan M'Aulay, his friend the Earl of Menteith, and Annot Lyle. Annot is a young woman who has been brought up by the M'Aulays since being captured as a girl during a blood feud against the MacEagh clan (also known as the Children of the Mist). M'Aulay and Menteith are both members of Montrose's army. Annot eventually marries Menteith after it is discovered that she has aristocratic blood, and was kidnapped by the MacEaghs as a baby. This leads to the jealous M'Aulay stabbing Menteith and then fleeing Montrose's army. Menteith survives whilst M'Aulay disappears and is rumoured to have been killed by the MacEaghs.

Walter Scott， 1st Baronet （15 August 1771 – 21 September 1832） was a Scottish historical novelist， playwright， and poet， popular throughout much of the world during his time. Scott was the first English-language author to have a truly international career in his lifetime， with many contemporary readers in Europe， Australia， and North America. His novels and poetry are still read， and many of his works remain classics of both English-language literature and of Scottish literature.

It was during the period of that great and bloody Civil War which agitated Britain during the seventeenth century, that our tale has its commencement. Scotland had as yet remained free from the ravages of intestine war, although its inhabitants were much divided in political opinions; and many of them, tired of the control of the Estates of Parliament, and disapproving of the bold measure which they had adopted, by sending into England a large army to the assistance of the Parliament, were determined on their part to embrace the earliest opportunity of declaring for the King, and making such a diversion as should at least compel the recall of General Leslie's army out of England, if it did not recover a great part of Scotland to the King's allegiance. This plan was chiefly adopted by the northern nobility, who had resisted with great obstinacy the adoption of the Solemn League and Covenant, and by many of the chiefs of the Highland clans, who conceived their interest and authority to be connected with royalty, who had, besides, a decided aversion to the Presbyterian form of religion, and who, finally, were in that half savage state of society, in which war is always more welcome than peace.