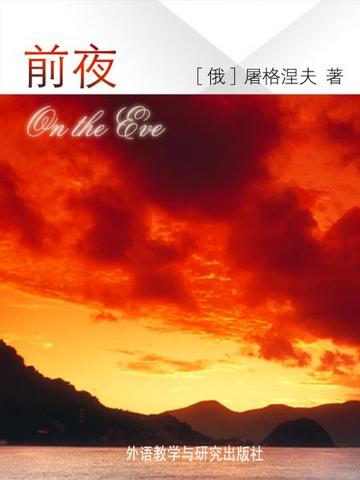 It is a major work concerning love amid a time of war and revolutionary social change. Set in 1853, On the Eve deals with the problems facing the younger intelligentsia on the eve of the Crimean War and speculates on the outcome of the emancipation of the serfs in 1861. Elena, its principal character, is a charming yet serious-minded, morally courageous young woman. Her concern for justice finds no outlet in her small circle of family and friends until she is introduced to the young Bulgarian patriot Insarov, whose idealism matches her own and who becomes Elena's companion and the catalyst for the changes in her life.

The story revolves around Elena, a girl with a very affected mother and a father who is a retired guards lieutenant and keeps a mistress. On the eve of the Crimean War, Elena is pursued by a free-spirited sculptor (Shubin) and an uptight student (Berzeniev). But when Berzeniev's dashing Bulgarian friend Insarov meets Elena, they soon fall in love. Secretly marrying the Bulgarian revolutionary, Elena invites the ire of her parents, who had hoped to marry her to a more respectable suitor. Insarov falls ill, but partly recovers. On the outbreak of the war, Insarov's call home only complicates matters further. Insarov returns with Elena to Bulgaria, but dies on the way in Venice. Elena is never heard of again.

Ivan Sergeyevich Turgenev (November 9, 1818—September 3, 1883) was a Russian novelist, short story writer, and playwright. His first major publication, a short story collection entitled A Sportsman's Sketches, is a milestone of Russian Realism, and his novel Fathers and Sons is regarded as one of the major works of 19th-century fiction.