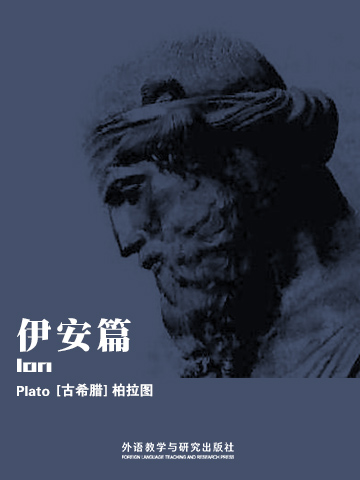 Plato’s argument is supposed to be an early example of a so-called genetic fallacy since his conclusion arises from his famous lodestone (magnet) analogy. Ion, the rhapsode “dangles like a lodestone at the end of a chain of lodestones. The muse inspires the poet (Homer in Ion’s case) and the poet inspires the rhapsode.” Plato’s dialogues are themselves “examples of artistry that continue to be stageworthy;” it is a paradox that “Plato the supreme enemy of art is also the supreme artist.”

In Plato's Ion Socrates discusses with Ion, a professional rhapsode who also lectures on Homer, the question of whether the rhapsode, a performer of poetry, gives his performance on account of his skill and knowledge or by virtue of divine possession. It is one of the shorter of Plato's dialogues.

Plato was a philosopher, as well as mathematician, in Classical Greece. He is considered an essential figure in the development of philosophy, especially the Western tradition, and he founded the Academy in Athens, the first institution of higher learning in the Western world. Along with his teacher Socrates and his most famous student, Aristotle, Plato laid the foundations of Western philosophy and science. Alfred North Whitehead once noted: "the safest general characterization of the European philosophical tradition is that it consists of a series of footnotes to Plato."

ION: Very true, Socrates; interpretation has certainly been the most laborious part of my art; and I believe myself able to speak about Homer better than any man; and that neither Metrodorus of Lampsacus, nor Stesimbrotus of Thasos, nor Glaucon, nor any one else who ever was, had as good ideas about Homer as I have, or as many.