紫禁城的黄昏（京华往事）
Twilight in the Forbidden City 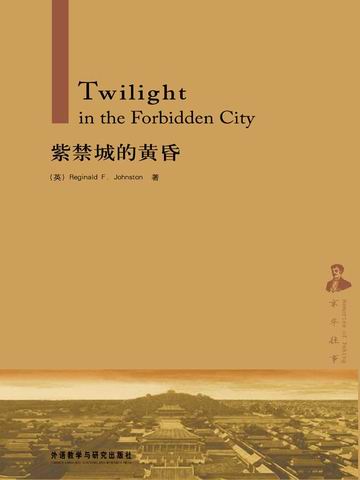 Johnston provides a good deal of anecdotal material for the last days of the Qing court before the 1911 Revolution. He knew many of the active players in those events, and his observations on the Qing court's political structure, and in particular the Imperial Household Department, are of historical significance. Johnston had little to say about Empress Dowager Cixi and many other principal players in these events. Twilight in the Forbidden City is a history of an entire period and not an exclusive portrait of the last emperor of China. The film The Last Emperor features the book.

Twilight in the Forbidden City (Chinese: 紫禁城的黄昏; pinyin: Zǐjìnchéng de Huánghūn) is Reginald Johnston's 486-page memoir of Henry Puyi, who had been the Xuantong Emperor of the Qing dynasty. Johnston was tutor to the Emperor and an eyewitness to events in China in the 1920s and 1930s. Johnston was also a professor of Chinese at the University of London as well as the British Commissioner of Weihaiwei.

Sir Reginald Fleming Johnston, KCMG, CBE (13 October 1874–6 March 1938) was a Scottish academic and diplomat who served as the tutor and advisor to Puyi, the last Emperor of China and as the last colonial governor of Weihaiwei.

In the tenth month of the chia-tzǔ year, after leaving the residence of prince Ch'un, I took refuge in the Japanese Legation. It was Johnston, my tutor, who was chiefly instrumental in rescuing me from peril. Moreover, he it was who first interviewed the Japanese Minister, Fang Tsê, on my behalf, after which Fang Tsê received me courteously and allowed me to use his Legation as a place of refuge from the wild soldiery. In the second month of the i-ch'ou year.I made another move, and went to reside in Tientsin. That was seven years ago, and Johnston from first to last, both in Peking and subsequently in Tientsin, was my companion, throughout a period of thirteen years. No one has a more intimate knowledge than he of the disasters and hardships of that critical period. He is therefore well fitted to take up his pen and make a record of events in which he himself played a part. To those who look back upon the sorrows and disorders of that time, this true record of his, based on personal experience and observation, will indeed be a thing of value. As a writer and as a man Johnston is one who is not surpassed by the best of our native scholars. When his book appears I know it will be highly prized by the world.