星球大战
The War of the Worlds 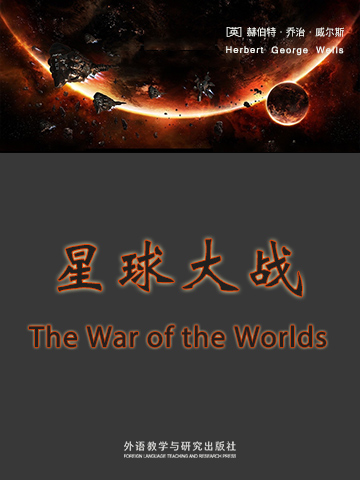 The War of the Worlds is a science fiction novel by English author H.G.Wells. It first appeared in serialized form in 1897, published simultaneously in Pearson's Magazine in the UK and Cosmopolitan magazine in the US. The first appearance in book form was published by William Heinemann of London in 1898. It is the first-person narrative of an unnamed protagonist in Surrey and that of his younger brother in London as Earth is invaded by Martians. Written between 1895 and 1897, it is one of the earliest stories that detail a conflict between mankind and an extraterrestrial race.

Herbert George Wells (21 September 1866–13 August 1946), known primarily as H.G.Wells, was a prolific English writer in many genres, including the novel, history, politics, and social commentary, and textbooks and rules for war games. He is now best remembered for his science fiction novels, and Wells is called the father of science fiction, along with Jules Verne and Hugo Gernsback. His most notable science fiction works include The Time Machine (1895), The Island of Doctor Moreau (1896), The Invisible Man (1897), and The War of the Worlds (1898).

No one would have believed in the last years of the nineteenth century that this world was being watched keenly and closely by intelligences greater than man's and yet as mortal as his own; that as men busied themselves about their various concerns they were scrutinised and studied, perhaps almost as narrowly as a man with a microscope might scru-tinise the transient creatures that swarm and multiply in a drop of water. With infinite complacency men went to and fro over this globe about their little affairs, serene in their assurance of their empire over matter. It is possible that the infusoria under the microscope do the same.