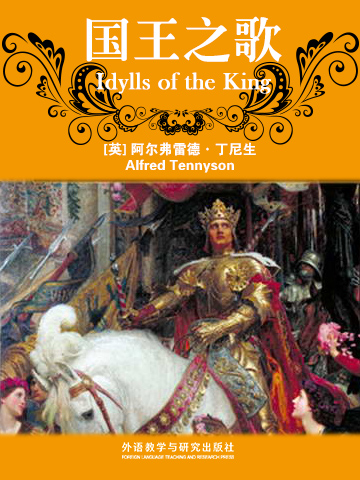 国王之歌
Idylls of the King

Idylls of the King, published between 1859 and 1885, is a cycle of twelve narrative poems by the English poet Alfred, Lord Tennyson (1809–1892; There is little transition between Idylls, but the central figure of Arthur links all the stories. The poems were dedicated to the late Albert, Prince Consort. The Idylls are written in blank verse. Tennyson's descriptions of nature are derived from observations of his own surroundings, collected over the course of many years.The dramatic narratives are not an epic either in structure or tone, but derive elegiac sadness in the style of the idylls of Theocritus.

Alfred Tennyson, 1st Baron Tennyson, FRS (6 August 1809 – 6 October 1892) was Poet Laureate of Great Britain and Ireland during much of Queen Victoria's reign and remains one of the most popular British poets. Tennyson excelled at penning short lyrics，Much of his verse was based on classical mythological themes, such as Ulysses, although In Memoriam A.H.H. was written to commemorate his friend Arthur Hallam, a fellow poet and student at Trinity College, Cambridge, after he died of a stroke aged just 22.