圣诞树与婚礼
The Christmas Tree and the Wedding 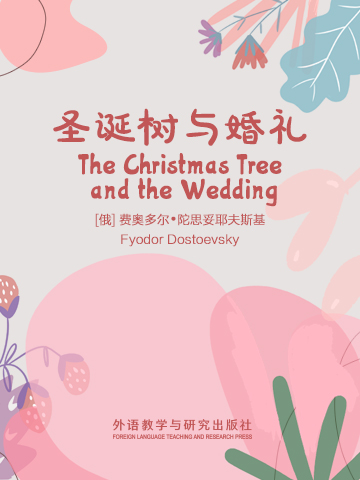 "A Christmas Tree and a Wedding"is a short story written by Fyodor Dostoyevsky in 1848. The piece is narrated by an awkward outcast attending a Christmas party. He observes the party's guest of honour and takes special interest in one of the children.

Fyodor Mikhailovich Dostoyevsky (11 November 1821 —9 February 1881), sometimes transliterated Dostoevsky, was a Russian novelist, short story writer, essayist, journalist and philosopher. Dostoyevsky's literary works explore human psychology in the troubled political, social, and spiritual atmosphere of 19th-century Russia. Many of his works contain a strong emphasis on Christianity, and its message of absolute love, forgiveness and charity, explored within the realm of the individual, confronted with all of life's hardships and beauty.

I was an outsider, and, as I had no special matters to air, I was able to spend the evening independently of the others. There was another gentleman present who like myself had just stumbled upon this affair of domestic bliss. He was the first to attract my attention. His appearance was not that of a man of birth or high family. He was tall, rather thin, very serious, and well dressed. Apparently he had no heart for the family festivities. The instant he went off into a corner by himself the smile disappeared from his face, and his thick dark brows knitted into a frown. He knew no one except the host and showed every sign of being bored to death, though bravely sustaining the role of thorough enjoyment to the end. Later I learned that he was a provincial, had come to the capital on some important, brain-racking business, had brought a letter of recommendation to our host, and our host had taken him under his protection, not at all con amore. It was merely out of politeness that he had invited him to the children's ball.