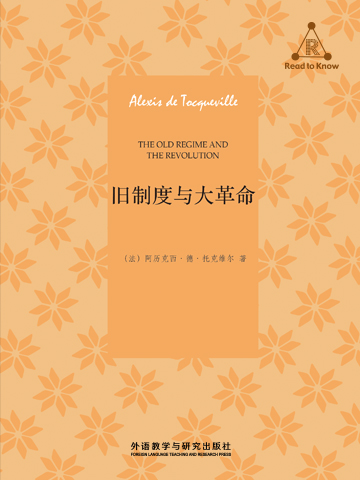 旧制度与大革命
The Old Regime and the Revolution

Alexis de Tocqueville was a French diplomat, political scientist and historian. He was best known for his works Democracy in America (appearing in two volumes, 1835 and 1840) and The Old Regime and the Revolution (1856). Since 1839, he served as a member of the House of Representatives. After the February 1848 Revolution, he participated in drafting of the new Constitution of the Second Republic (1848–1851), and once served as Minister of Foreign Affairs from June to October 1849. Opposing to Louis Napoléon Bonaparte's 2 December 1851 coup, he was detained. The December 1851 coup and the establishment of the Second Empire’s authoritarian regime made him pessimistic and disappointed, forcing him to become a “domestic exile”.