理性时代
The Age of Reason 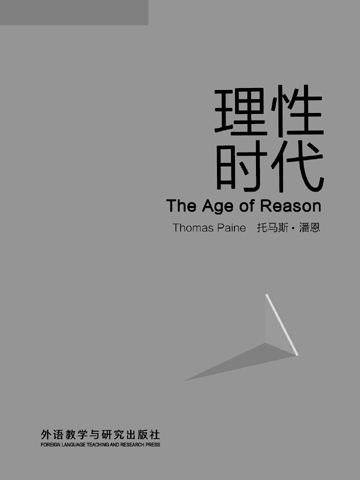 The Age of Reason argues for the philosophical position of deism. It follows in the tradition of 18th century British deism, and challenges institutionalized religion and the legitimacy of the Bible. Originally distributed as unbound pamphlets, it was a best-seller in the United States which inspired and guided many free thinkers. The author outlines his major arguments and personal creed and analyzes specific portions of the Bible to demonstrate that it is not the revealed world of God.

Thomas Paine (1737-1809), was an English-American writer and political activist, philosopher, political theorist, and revolutionary. Among his works, Common Sense and The American Crisis were the two most influential pamphlets at the start of the American Revolution, and helped inspire the patriots in 1776 to declare independence from Great Britain. His ideas reflected Enlightenment-era ideals of transnational human rights.

It is impossible to calculate the moral mischief, if I may so express it, that mental lying has produced in society. When a man has so far corrupted and prostituted the chastity of his mind, as to subscribe his professional belief to things he does not believe, he has prepared himself for the commission of every other crime. He takes up the trade of a priest for the sake of gain, and, in order to qualify himself for that trade, he begins with a perjury. Can we conceive anything more destructive to morality than this?