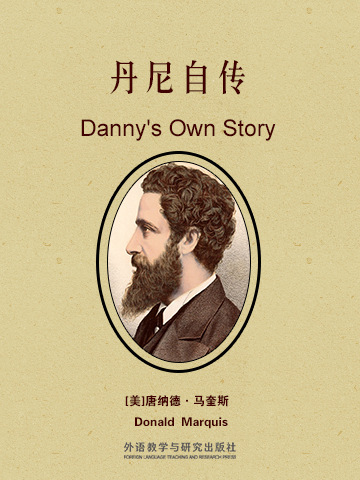 Danny is the proverbial basket-on-the-doorstep baby, found by Hank and Elmira Walters, a childless couple who welcome him into their home because they need a new topic over which to bicker. Bicker they do, and fight just as often, from the day they attempt to settle on a name, to the day eighteen years later, when Danny and Hank come to blows and Danny leaves home in company with Dr. Kirby, bottler and supplier of the miracle elixir, Siwash Indian Sagraw. For years Danny wanders aimlessly--from Illinois to Indiana to Ohio, back to Illinois, then into Tennessee and points south--sometimes in company with Dr. Kirby, sometimes alone; sometimes working as a circus roustabout, wild man from Borneo, or Patagonian cannibal; sometimes only bumming around, but always feeling inextricably bound to Dr. Kirby, as though by fate. At last, as in most comedies, all problems are resolved when Danny finds contentment with his true parents, and Dr. Kirby is helped to find the lost love after which he has quested for the greater portion of his life.

Danny's Own Story is the first novel by Donald Marquis, and there are definitely a few touches of Marquis' poetic genius. It's a picaresque journey through the seedier parts of early-1900s small-town America: hucksters, quacks, fake Indians, temperance unions, uptight schoolmarms with tragic pasts. There are some enjoyable little set-pieces, but then an extended satire on race relations in the South makes very uncomfortable reading (lovingly detailed phonetic slave-speech and more n-words than Django Unchained) as Marquis' mockery feels rather off-the-mark. A moment of genuine tension as the Klan debate whether to lynch a white man . The resolution of this finally reveals the Plot; it's quite a clever little construction but the young Marquis doesn't know what to do with it after that.

Donald Marquis (July 29, 1878, in Walnut, Illinois – December 29, 1937, in New York City) was a humorist, journalist, and author. He was variously a novelist, poet, newspaper columnist, and playwright. He is remembered best for creating the characters "Archy" and "Mehitabel", supposed authors of humorous verse. During his lifetime he was equally famous for creating another fictitious character, "the Old Soak," who was the subject of two books, a hit Broadway play (1922–23), a silent movie (1926) and a talkie (1937).